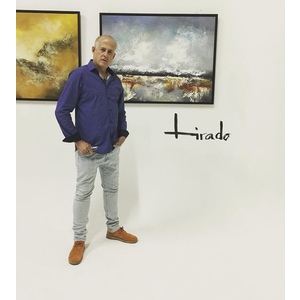 "Carlos J Tirado explores abstract expressionism paintings based on oil on canvas. The nobility of the mix media elements allows Carlos J Tirado to recreate his experiences with nature into the canvas."

Carlos J. Tirado (born on April 3, 1964 in Caracas, Venezuela) is an artist, painter and sculptor who has developed a very personal and precise line of work linked to Neo-Pop art. With plenty of personal art exhibitions, Tirado has participated in numerous collective exhibitions, receiving different awards such as “III Premio de Escultura” del Certamen Aires de Córdoba in 2004 and other...

Tirado grew up in an upper-middle-class family environment. His inclination for the arts started from an early age. At 8 years old, he was already experimenting with tridimensional forms, creating molds out of cast lead from pieces previously gathered on the streets. These first artistic experiences led by his inquisitive nature, provided the ground to continue exploring the possibilities with different materials like wood, waste and plaster. His childhood games were centered around painting and sculpting, which played an important role that ranged from recreational to aesthetics.
fter finishing High School, Tirado decided to study Art. However, that was not part of his parents’ plan, to which he agreed to study Law at the Universidad Santa Maria in Caracas at night, at his parents request, while attending Art School at the Escuela Cristobal Rojas during the day. He graduated from Law School in 1991. His art studies have never stopped.

Artistic Carrier
He moved to South Florida in xxxx and started working with materials that were very different from what he used in Venezuela, which in some cases were very restrictive and different: the river sand found in his country was substituted in his art work for a fine, white sand from ground coral, that resulted in a totally different outcome from the art pieces created in his native country.

From this point on, a new series of Black and White artwork is born. With the use of coral sand mixed with black resin over different objects, Tirado recreated the objects and people found in the ruins of Pompeii, covered in ashes and lava, soaked by time. These pieces have a calcified look with an intense black hue that resembles raw petroleum. This art evokes the look of a city that could be covered in ashes from a Volcano, and at the same time, it is a metaphor for Caracas and its oil-covered society.
The Antipixel
Tirado agrees that he feels an attraction towards Pop-art . One of his major impulses has been to humanize those mass-reaching characters like comic characters, with common problems as any individual living in an everyday environment. Nevertheless, his major contribution has been his personal language representing these themes, which indeed resembles Pop Art, but with a twist that Tirado has been able to accomplish after years of investigation and research. In search of his own expression, he decided to recycle an already existing man-made material, changing its original purpose.

Abstract Expressionism
The central theme present throughout my line of work flows from the organic forms of nature and its constant evolution. The natural evolution of life itself. I identify myself with those who perceive art as the expression of an individual in a specific and unique moment of one’s life.
I would describe my style as “abstract expressionism” moving sometimes into “figurative abstractionism” with an intense and colorful palette, including contrast and textures that invite the spectator to reflect about its form and meaning. 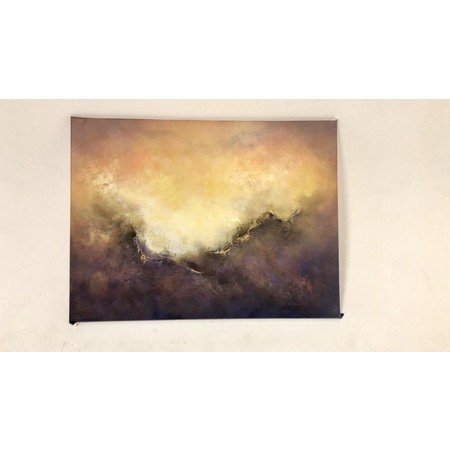